Once Carroll Shelby decides to do something, if the plan turns sour he doesn’t give up easily. As he’s been heard to say more than once, “Sometimes you have to make chicken salad out of chickenshit.” Take the 427 Cobra S/C completion cars, for instance. The 427 Cobra project began to take shape at the end of 1964. Ken Miles had experimented with a lightweight 390 engine (and later a 427) in a leaf spring chassis. The additional 100 horsepower pointed the direction for the new Cobra. That would be necessary because rumors were rampant that Chevrolet was toying with a lightweight version of the Stingray they were calling the Grand Sport. They were also trying to keep the wraps on a new 427 cubic-inch engine. It was a safe bet the 427 would eventually find its way into the Corvette, and that would make the small-block Cobra an instant back-marker. Ferrari was also building a new model—the 275LM (for “LeMans”). The engine was located behind the driver and the small block Cobras would have been no match for this car, either. Shelby knew all of this, and if he wanted to stay in the race he had to do something.

The original plan was to have AC Cars build 100 competition models (that number chosen because it was the minimum number required for a car to be accepted by the FIA for competition). As soon as the 100 cars (serial numbered CSX3001 through CSX3100) were completed, 427 Cobra street model production could begin. The two models would be different because everyone at Shelby American knew they would never sell more than 100 pure competition model Cobras. As it would turn out, there weren’t buyers for half that number. 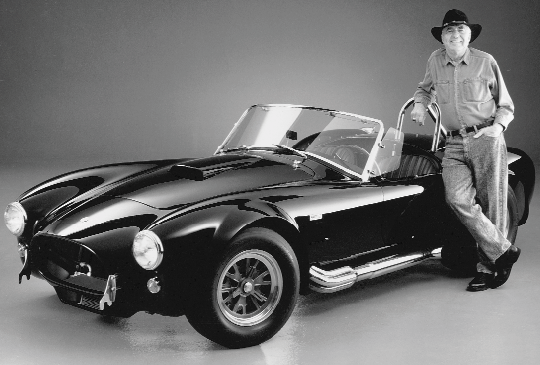 CSX3062 was used for public relations photos before it was sold to a buyer in Japan.