The 427 Cobra competition car was going to be Carroll Shelby’s secret weapon for 1965. The seed had been planted during a “What if.... ?” session at Shelby American in late 1963. And Ken Miles was the farmer. Before joining Shelby American, Miles had been responsible for a long line of modified sports car “specials” and that was where his talents shone especially bright. Stuffing a big, 427 Ford NASCAR engine into a Cobra chassis appeared to be the quickest solution to the problem of how to make the Cobra go faster. 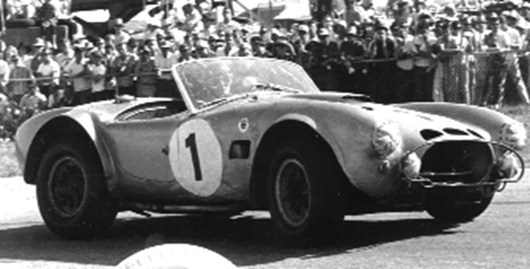 The evolution of the 427 Cobra can actually be told in four photos. 1) The first prototype, CSX2196, was essentially a 289 Cobra with a 427 shoe-horned into the engine bay. It was crude but it showed that 100 more horsepower was the answer.